1/ Why did you create Gratitude Games?

The short version? Because my life depended on it. It was do this or just brown out and die.

And for the longer version, let me start by saying that I’ve lived most of my 66 years with a deep sense of ingratitude, complaint. and resentment.

Until the last few years, I’d describe the landscape of my life as “Life isn’t fair / I don’t deserve this.”

I just didn’t see life stacked in my favor. As a result, I did a lot of things that in retrospect to even things out, to  least get something.

I lived most of my life with the deep sense that things didn’t really work out the way I really wanted them.

Sure I had lots of success, but overall, what came my way felt fleeting or shallow.

Towards the end of 2010, I had a deep sense that I had gone as far as I was going with that perspective.

While I had a successful business with lots of public recognition with many high profile clients around the world, I hit an inner wall or held back by some invisible tether cord.

In retrospect that was the turning point for how I would begin to live the rest of my life, bringing me to crate Gratitude Games.

Sure, I still had to make a living. As a smart, creative and persistent guy, I could still do lots of things that clients would pay for me to produce.

However, it was no longer meaningful enough to sustain my attention and follow through.

With each following quarter, I found myself just dialing back more and more on my ability to sustain focus on my professional work.

I began to just drift with a mild sense of dread, worry, and bedevilment.

In 2013 or so I made a commitment to myself, if whatever I was doing did not light up my passion, mind, and soul, then I’d just take a nap or have lunch with one of my favorite sages and scholars.

As I became more silent, mindful, and sense-aware (using tools and techniques that I now offer at Gratitude Games), it became clearer and clearer that I was living at the bottom of a pit … in which I fell long ago and mistook for reality.

In this Pit, at my innermost core, I didn’t feel loved or even lovable, worthy or capable of being loved. 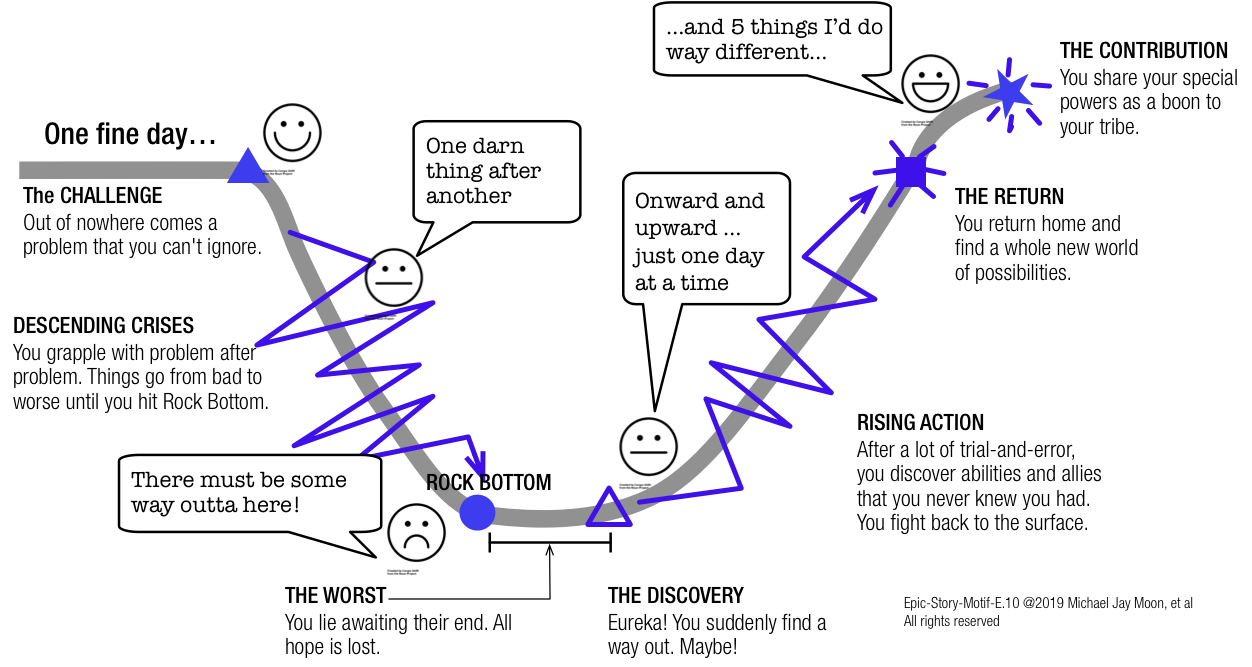 didn’t feel loved by the world, not by my close friends, not by the wife of then 11 years.

Most disturbing, I didn’t feel loved by myself and felt I never be unlovable.

I remember clearly standing naked in front of the mirror, just out of a morning shower, and gazed deep into his eyes and into the soul of that person standing there.

I felt a sense of vertigo. I felt a powerful upwelling of raw energy and emotions, swirling up through my torso with increasing intensity. Then, I begin to panic. I was no longer in control.

A wave of tears swept over me, a deep overwhelming sadness that I somehow I had hurt a deep and very private place in me.

As I cried without restraint, I asked,

I also knew with complete certainty, that if I did not take immediate action to change this, I would be dead within weeks or months.

I felt a chill run through my body and deep into the marrow of my bones with a simple message,

I hit a rock bottom with no apparent way out.

I came to the recognition that if I don’t fix that, if I don’t heal that, then life would conspire for my early release.

In that moment, I had one choice.

And, you know, checking out or giving up was a viable, no attractive, option.

Unlike many choices that we make in life, fear did not play a role. Rather,

Of my two options, which I love more?

Little did I know then that my Journey had begun, that would bring me to creating Gratitude Games.

The figure above depicts the classic narrative and phases of a Hero’s Quest. My story starts with The Discovery and carries through Rising Action and The Return